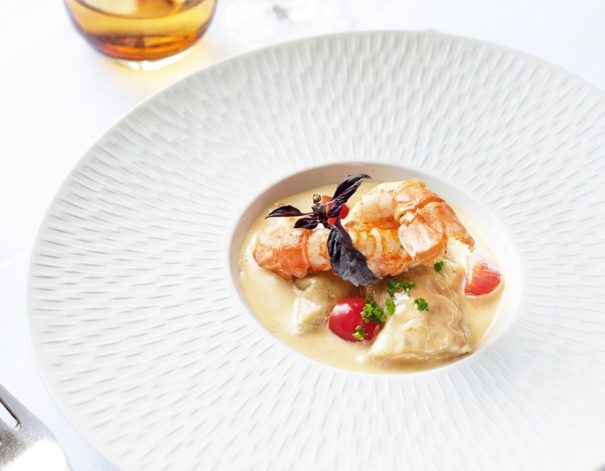 Bouillabaisse is a classic French seafood soup, often served with a rouille – a Provencal mayonnaise-style sauce. This bouillabaisse recipe from Tom Aikens creates a dish which can be served in a number of ways, with the broth and fish plated separately, or in one steaming bowl – either way this is an incredible recipe, with a hint of aniseed flavour provided by the fennel.

Bouillabaisse was originally a stew made by Marseille fishermen using the bony rockfish which they were unable to sell to restaurants or markets. There are at least three kinds of fish in a traditional bouillabaisse: typically red rascasse (Scorpaena scrofa); sea robin; and European conger. It can also include gilt-head bream; turbot; monkfish; mullet; or European hake. It usually also includes shellfish and other seafood such as sea urchins, mussels; velvet crabs; spider crab or octopus. More expensive versions may add langoustine (European lobster), though this was not part of the traditional dish made by Marseille fishermen. Vegetables such as leeks, onions, tomatoes, celery, and potatoes are simmered together with the broth and served with the fish. The broth is traditionally served with a rouille, a mayonnaise made of olive oil, garlic, saffron, and cayenne pepper on grilled slices of bread.

What makes a bouillabaisse different from other fish soups is the selection of Provençal herbs and spices in the broth; the use of bony local Mediterranean fish; the way the fish are added one at a time, and brought to a boil; and the method of serving. In Marseille, the broth is served first in a soup plate with slices of bread and rouille, then the fish is served separately on a large platter (see image at right); or, more simply, as Julia Child suggests, the fish and broth are brought to the table separately and served together in large soup plates.

There are no reviews yet.

Be the first to review “Bouillabaisse Soup” Cancel reply